Will Harris is a writer of mixed Anglo-Indonesian heritage, born and based in London. He has worked in schools, led workshops at the Southbank Centre and teaches for The Poetry School. He is an Assistant Editor at The Rialto and a fellow of The Complete Works III. Published in the Bloodaxe anthology Ten: Poets of the New Generation, he was featured in ES Magazine as part of the “new guard” of London poets. His poem ‘SAY’ was shortlisted for the Forward Prize for Best Single Poem 2018, and he won a Poetry Fellowship from the Arts Foundation in 2019. His debut pamphlet of poems, All this is implied, published by HappenStance in 2017, was joint winner of the London Review Bookshop Pamphlet of the Year and shortlisted for the Callum Macdonald Memorial Award by the National Library of Scotland. Mixed-Race Superman, an essay, was published by Peninsula Press in 2018 and in an expanded edition by Melville House in the US in 2019. His first full poetry collection, RENDANG, is forthcoming from Granta in the UK in February 2020 and from Wesleyan University Press in the US later in the year. 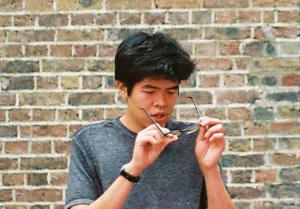